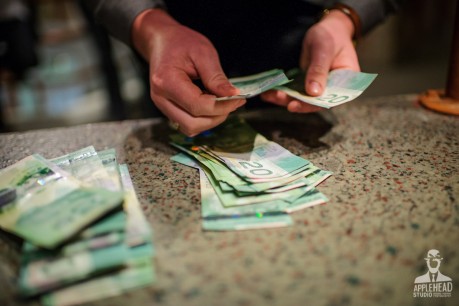 On the occasion of our one-year Awesomeversary, what could have been more awesome than to make everyone a winner?! Which is exactly what we did. All four finalists took home $1,000 to implement their super fantastic idea. A VERY special thank you to our Awesome Trustees, friends of Awesome, the Halifax Regional Municipality and the Province of Nova Scotia’s THRIVE! program for helping us raise the $4,000 to fund all four ideas. We sincerely appreciate your generosity and commitment to making Halifax such a cool place to live.

Keep your eyes peeled for these four ideas, coming soon to a Halifax location near you!

Giant Connect Four on the Commons – Submitted by Dan Corbett
It’s a game that can be played by four-year-olds or ninety-four-year-olds. Connect Four is easy and fun, making it way cooler than rounding up a bunch of horses and yelling “king me!” So picture a giant, 12 ft. version of this game being built on the Halifax Commons. Add to that several other regular-sized boards and you have yourself a mean afternoon tournament on a summer’s day. It’s an easy way to bring a whole lot of delight to Halifax.

Lego and Have Some Fun – Submitted by Sam Evans
Sam Evans is a ten-year-old boy who loves Lego for its fun and creativity and wants to share it with lots of other kids. His project is to buy $1,000 worth of Lego and host a big Lego party at the skateboard park in Halifax for all the kids who want to come out and be creative and see what can be made. Once the event is over Sam intends to donate all the Lego equally to Halifax Public Libraries, Boys & Girls Club of Halifax/Dartmouth, YMCA kids program, and the Discovery Centre.

Permanent Ping Pong – Submitted by Veronica Simmonds
When Veronica Simmonds travelled to Berlin, Germany, she fell in love with the city’s playfulness. But what she loved most were the permanent public ping-pong tables that line the city’s canal. People of all ages gather at all times of the day to play, laugh and pong. Veronica wants to bring this phenomenon to Halifax. Her project would see a permanent, concrete ping-pong table established on the north common. Talk about a boon to community health and wellness and an undeniable fun maker!

Joe Howe Fairy Light Lane – Submitted by Allison Moz
Allison Moz is a Mom with a mission. She wants to transform the industrial corner of Maynard and Charles into a magical lane laced with fairy lights. Using 320 feet of solar powered LED Christmas lights (5000 bulbs) her vision is to will draw the eye away from the visual chaos of the repair shops and down the quiet tree-lined street that serves as the main entrance to Joseph Howe. Her reason for doing this is her daughter and the children who live in the area. She believes in creating imaginative, playful spaces for children to build self-esteem, to dream and to celebrate.